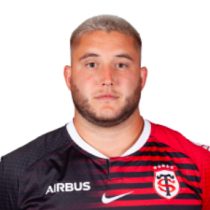 A powerful presence in the front of the Toulouse and French row, Cyril Baille joined the Toulouse training squad back in 2009 and broke into the senior squad during the 2012/13 season.

The skilful loosehead prop quickly became a regular in the squad racking up 17 appearances in his first full season.

An u20s international in 2013, it took just three years for Baille to make his test debut coming off the bench against Samoa during the 2016 November Internationals.

He earned his first start for Les Bleus against Australia a week later. By 2017, Baille was a regular for both Toulouse as he started all five of France's Six Nations matches.

Baille represented France on four occasions during the 2019 Rugby World Cup in Japan.

The loosehead was a cornerstone of the Toulouse pack that won the Champions Cup for the fifth time during the 2020/21 season and topped the season off with a Top 14 title (his second title) to go with it.

He ended 2021 with over 100 appearances for Toulouse and 31 test caps for France which includes 14 Six Nations caps (all coming in the starting XV).

He signed a new deal with Toulouse in December 2021 which will see him remain at the club until the end of the 2026/27 season.