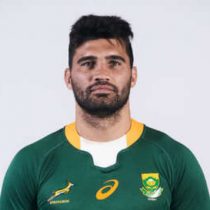 A product of the lesser-known Milnerton High School in the Western Cape. Although de Allende didn't take the classic route to the Springbok jersey as many of the players before him, he has been just as destructive and impactful as the men who wore the #12 jersey before him.

Having only picking the game up in his teenage years, de Allende represented Western Province at U19 and U21 level before hitting the Varisty Cup scene with the University of Cape Town. de Allende started his professional career playing in the centres and on the wing but has since cemented his place in the midfield.

A strong ball carrier that more often than not gets over the gain line, the South African is an excellent defender with his promise being was recognised early as he was rewarded with his senior provincial debut for Western Province in the Vodacom Cup, a Currie Cup debut and started the victorious final, all in the same year.

A Super Rugby debut came for de Allende in 2013 at the age of 22 with a test debut coming a year later during the 2014 Rugby Championship against Argentina. By 2015, de Allende become a regular in the Springbok squad and put in some superb performances in the 2015 Rugby Championship against Australia and New Zealand. This led to him being included in the Springboks Rugby World Cup squad where he featured regularly in the side's run into the semi-finals.

The centre has become a regular in the squad and played a leading role in South Africa’s 2019 World Cup-winning campaign starting six of his seven appearances. De Allende played a crucial role in the run to the final scoring two tries in the knock-out stages against Japan and Wales with the latter proving to be a match-winner. His attacking form was equally matched by a physical defensive display as he made his presence felt at every stage with a huge work rate from midfield.

Following the World Cup, he had a stint with Panasonic Wild Knights in Japan before signing a two-year deal with Munster. `

As of June 2020, de Allende has 47 test caps and has scored 6 test tries and has played over 90 Super Rugby games for the Stormers.

In his two seasons with Munster, de Allende scored five tries in 37 appearances, at the end of the 2021/22 season he left Munster and signed with then Japan Rugby League One Champions The Panasonic Wild Knights.

He heads into the 2022 test season for the Springboks with 58 test caps and seven tries.