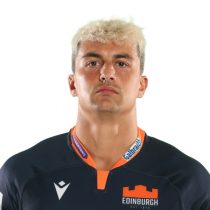 Born and raised in Glasgow, the former James Gillespie's high school pupil is considered one of the top Scottish prospects to have come through the region’s player pathway while playing for former club, Boroughmuir and attending the rugby performance course at Telford College.

During that time he developed a reputation for his searing pace and try-scoring exploits.

Edinburgh Rugby signed the then Melrose and Scotland under-20 winger on a two-year deal ahead of the 2014/15 campaign.

On loan to Scotland 7s for the majority of season 2014/15, he emerged top try-scorer in the competition at Wellington 7s, after scoring seven tries for the Scotland 7s, which made him the event's top try scorer. He was included in the World Rugby 'dream team' for the event.

He made his Scotland debut during the summer test victory over Italy in 2015 and started his first Test match for Scotland when they faced Japan in Toyota City in June 2016, replacing absent Tim Visser.

In February the following year, he signed a new deal to remain with Edinburgh Rugby, committing his long-term future to the club.