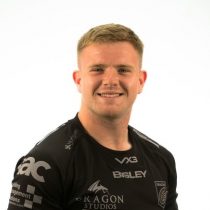 Babos made his senior debut for the Dragons in 2017 in the Anglo-Welsh clash with Scarlets, capping his first start with a try.

The Newport-born scrum half - who spent the 2019 summer playing in New Zealand - made his PRO14 debut against Leinster in November 2017.

He ended the 2017/18 season with 13 appearances for Dragons and 5 points scored. Babos is currently part of the Senior Academy ranks at Dragons and trains with the senior squad.