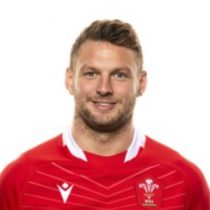 Biggar was a regular part of the Ospreys squad since 2007 and has had the honour of becoming the youngest man to reach one hundred appearances for the region. He led the Ospreys to the 2012 Pro12 title, kicking the championship winner conversion.

Biggar made his Welsh debut at the tender age of 19 against Canada in 2008. He was finally given an extended run in the Wales No.10 shirt during the victorious 2013 Six Nations campaign, starting all games at fly-half before topping the tournament off with eight points in the Championship decider against England.

He made his presence felt on the Test scene when he helped Wales pick up a rare win against South Africa in 2014, where he was awarded man of the match with a brilliant defensive performance.

When the 2015 Rugby World Cup came around, Biggar assumed kicking duties for Wales – scoring 56 points in the process as Wales reached the quarter-final stage.

In April 2017, he earned his first call up to The British & Irish Lions squad to tour New Zealand. Biggar's strength under the high ball - combined with his smart kicking from hand - have also been key to his rise in stature in Wales, for whom he started in all three Tests in New Zealand last summer.

He would continue to perform on both a club and international stage and became the top points-scorer in Pro14 history towards the end of the 2017/18 season. At club level Biggar was the youngest player to pass the 200-appearance mark for the Ospreys at the age of just 22. He earned a reputation as one of the PRO14's most accurate marksmen.

In September 2017, Northampton Saints confirmed that he had signed a contract to join the East Midlands club in the summer of 2018.

He made a big impact in his first season with Northampton Saints, making 23 appearances in his debut season at Franklin’s Gardens, ending the term with 191 points to his tally and helping the men in Black, Green and Gold to their first appearance in the knock-out stages of the Premiership in four years.

He took full control of the Wales 10 jersey during the World Cup, following an injury to Gareth Anscombe, and helped Wales to a fourth-place finish featuring in 6 of the 7 games scoring 41 points.

Biggar started all five games of the 2021 Six Nations, helping Wales to the title with 36 points in all. His best performance arguably came in the narrow loss to France, with a 20-point haul including a rare Test try in the last-gasp defeat.

That Six Nations title was Biggar’s third, after 2013 and a Grand Slam in 2019, while he notched 494 Test points in 92 caps – no mean feat considering Leigh Halfpenny has been Wales’ front-line kicker for much of his career.

In May 2021, he was named in the British and Irish Lions 37-man squad for their tour of South Africa