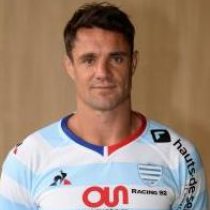 Carter, who is of pākehā and Māori descent, was born in Leeston, a small town 10 minutes drive from the Carter family home in Southbridge in the South Island of New Zealand.

He attended Ellesmere College where he played mostly at first five-eighth, and then in his final year he transferred to Christchurch Boys High School to further his chances of making it big in rugby.

As the highest points scorer in both Super Rugby and test match rugby, Carter is regarded as one of the world’s best current first-fives and is believed by many to be one of rugby’s greatest fly-halves ever. Carter made his provincial debut for Canterbury in 2002 and joined the Crusaders the following season.

He also made his All Blacks debut in 2003, scoring 20 points against Wales in Hamilton and going on to make the 2003 Rugby World Cup squad.

He also played in the 2007 and 2011 Rugby World Cups, although a groin injury kept him out of the 2011 RWC playoffs and saw him miss the early stages of the 2012 Super Rugby season.

He earned his 100th Super Rugby cap for the Crusaders against the Hurricanes during the 2012 season.

Still revered as the best number 10 in the world, Carter, has had his battles with injuries in the 2014 & 15 seasons but regained full fitness to make the 2015 Rugby Championship side.

In December 2014, Carter announced that he will join Racing 92 in the Top 14 after the conclusion of the 2015 Rugby World Cup on a three-year-deal.

The former Crusaders, Perpignan and current Racing 92 fly-half has been named as the latest inductee into the RPA Hall of Fame.

The all-time leading Test points scorer will join an illustrious list of previous inductees. In an exceptional 14-year career, which has included 112 Test caps, 1,598 Test points, 3 Super Rugby titles, a French Top 14 Title and a winner of the 2015 Rugby World Cup with New Zealand in 2015.

Carter announced that he would join Japanese side Kobelco Steelers following the conclusion of the 2017/18 season.

In February 2019, it was confirmed that he would return to Racing 92 through to the end of the season. Carter failed a medical upon before arriving at Racing 92 which stopped his return to the TOP14.

Carter lead Kobe Steelers to the Japanese Top League title in the 2018/19 season and was named MVP of the season. Following the cancellation of the 2020 Top League season, Carter confirmed his departure from the club.

The Blues confirmed the signing of the former All Black for the 2020 Super Rugby Aotearoa season but the veteran did not take the pitch for the Auckland-based side and in February 2021 he announced his retirement from the game at the age of 39.