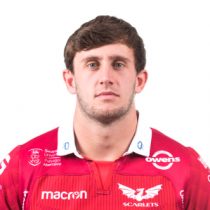 Born in Carmarthen, Jones came through the junior ranks at the Scarlets and is building a promising career at their home region.

Jones broken into the Scarlets squad during the end of the 2014/15 and is being closely mentored at the Parc y Scarlets by Stephen Jones.

An U20 Grand Slam winner with Wales in 2016, the promising fly-half signed a lengthy contract extension in January 2017 to remain in Llanelli for the next couple of years.