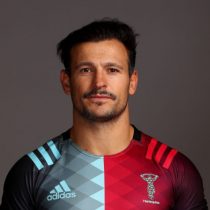 The extremely talented scrumhalf has represented England at almost every level - from Under-16 to the sevens team and the Test side. He has made more than 250 appearances and scored more than 276 points for Harlequins since joining the club from Leeds in 2006.

His Test breakthrough was during England’s summer tour of New Zealand in 2008 when he played off the bench for Richard Wigglesworth in Auckland and then scored a try from his own tapped penalty after starting the second Test in Christchurch.

He began every RBS 6 Nations Championship match in 2010 and toured Australasia that June. Danny won his 40th cap against Italy at Twickenham in March 2013 before being rested for England’s summer tour of South America.

Won the European challenge cup with Quins in 2011 and 2012 Premiership.

With speed and creativity he is a quality player and is one of the key men in the success of Harlequins. His fighting spirit and ability to break from around the fringes of the ruck often gives him the edge over opponents.

He was appointed captain of Quins from the 2015/16 season.

Care helped England to retain the 6 Nations title in 2017. In April of that year, the scrum-half was named as a vice-captain for Eddie Jones' squad to tour Argentina in June.

He gained 3 more caps for England during the November Series, finishing the tournament with 76 caps overall ahead of the 2018 Six Nations.

In October 2018, Care made his 250th appearance for Harlequins and marked it with a trademark breakaway try against Saracens at The Stoop in the Gallagher Premiership.

In January 2019, Care signed a new two-year contract with the Harlequins. However, 2019 was also the first year that Danny Care did not play for England since making his debut having last featured for England against Japan in November 2018.

In January 2021, he extended his stay at Harlequins with a new deal.