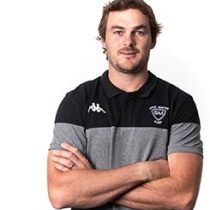 Danré was born in Port Elizabeth and attended Hoërskool Middelburg, playing flyhalf in the 1st XV.

In 2009, he moved to Cape Town and started his provincial career with Boland.

Danre's father, former Springbok legend Danie Gerber, wanted him to venture into golf, but Danre decided to stick with rugby and subsequently signed a young player’s contract with Bayonne as a medical joker in December 2010.