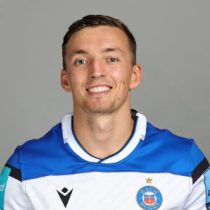 Atkins joined Bath Junior Academy since the age of 15 and became one of the members of Bath Rugby’s Senior Academy setup that claimed the U20 World Cup in 2016.

He made three first team appearances for Bath Rugby in 2016, and the quick-footed back had his sights set on breaking into the back three in 2017/18.

A member of the England U20 team who reached the final of the 2017 Junior World Cup, Atkins made three first team appearances in the 2017 season for Bath Rugby before joining Yorkshire Carnegie on a dual-registration agreement.

In January 2018, after seven senior appearances for Bath, Atkins signed a new contract with the club.

In March 2021, it was announced that Atkins would be joining Jersey Reds on loan from Bath after the former suffered a spate of injuries in the opening weeks of the season.