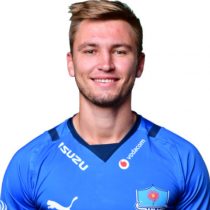 Standing at 1.94m tall and weighing in at 94kgs, Kriel is an ominous threat with ball in hand while his height becomes an obvious advantage when contesting the high ball. He is a hard-running physical back with an immense work rate.

Kriel played three matches for the Junior Springboks in 2018 and scored two tries.

The speedy outside back featured in one of the matches against Georgia in Stellenbosch and was included in the team’s touring squad to the UK where he played against Scotland and England.

In May 2019, he was named in the Junior Springboks squad for the 2019 World Rugby U20s Championship.

Following some time in the Stormers squad, he announced a move to the Bulls ahead of the 2021 Super Rugby season where he will link up with younger brother Richard.