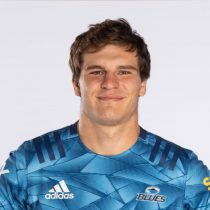 A tireless work ethic and full range of skills make Dillon Hunt a difficult customer for the opposition to contain.

The flanker has become renowned in New Zealand for his incredible work rate is often near the top of the tackling and ruck attended stats in any competition he features in. Hunt hails from the North Shore and went to Westlake Boys' High School before heading to the University of Otago.

After being largely overlooked at the University and having to work his way through the ranks, Hunt grasped his Super Rugby opportunity when it was presented to him. During the 2017 Super Rugby season, the Highlanders had a number of injuries in the back row giving Hunt a chance for to impress off the bench against the Blues on March 11.

He continued to shine for the side and even started the Highlanders win over the British and Irish Lions. His form for the Highlanders did not go unnoticed as he impressed enough to earn his debut for the Barbarians at Twickenham, then played for the New Zealand XV against a French XV the consecutive week.

In 2018 Dillon Hunt carried a high workload due to injury in the loose forwards, one of the competitions top tacklers who has built his game on work rate and efficiency. This was rewarded with his first All Blacks cap in November against Japan in Tokyo. He was one of the top tacklers during the 2018 Super Rugby season making 188 tackles in 14 games and has moved North Harbour for the 2018 Mitre 10 Cup season.

Hunt continually performed for the Highlanders but by the end of the 2019 season, he was yet to add to his test cap tally. Follow the conclusion of the 2020 Super Rugby Aotearoa season, Hunt signed a two-year deal to join the Blues in 2021. Hunt spent 4 years at the Highlanders racking up 45 appearances for the side.