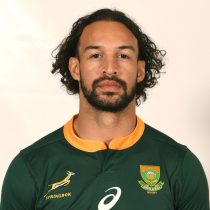 Schooled at Diocesan College, Leyds was earmarked for higher honours from an early age.

Fine performances for the Western Province U18, U19, and the University of Cape Town secured the utility back the fullback role for the 2012 Junior World Championships where the Baby Boks were crowned champions. 2013 saw the Leyds make his senior debut for WP in the Vodacom Cup.

In 2014, he made the move to the Western Force in Australia where he came off the bench three times against the Crusaders, Blues, and Reds. He returned to Western Province at the end of 2014 and was included in the 2015 & 2016 Stormers Super Rugby squad where be became a regular starter in the team.

Leyds has scored 105 points in 65 Super Rugby appearances since his debut in 2014.

He proved good form for the Stormers during the 2017 Super Rugby competition, receiving a call-up to the Springbok squad ahead of the Test series against France.

Following a break from international rugby, he earned a recall ahead of the 2019 Rugby Championship with 8 appearances to his name.

In March 2020, Leyds signed a contract with French Top 14 club La Rochelle, bringing his eight-year association with Western Province rugby to an end.

As of September 2020, he has made 2 appearances for the side.