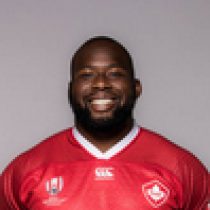 Djustice represented Canada at youth level, which resulted in a move to England joining the Leicester Tigers Academy. The youthful prop made his Test debut shortly after he joined the academy in 2013 at the tender age of 19, and has since been used as an impact player off the bench.

With a stellar reputation as a scrummager, the youngster was named in the Canadian national squad for the 2015 Rugby World Cup.

At the end of the 2016/17 season, the prop returned to his native Canada to feature for the Ontario Blues, but headed back to the UK for a test in the Championship when he signed for Ealing Trailfinders.

In April 2019, the 46 test cap Canadian International penned a deal with MLR side Seattle Seawolves.