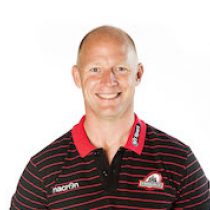 Hodge made his Scotland debut against France in Paris in 1997, he won 26 caps at stand-off over six years, scoring 123 points.

The former Scotland fly-half began his coaching career in the twilight of his playing days, at Leeds Tykes, where he supported the club’s academy, before coaching at Watsonians from 2005 to 2007.

Hodge, who was formerly part of Scotland's coaching team, returned to Edinburgh as an assistant coach in November 2015 after playing 150 times for the club over 11 seasons.

Hodge took on the role of the club's Backs Coach at the end of the Rugby World Cup 2015.

Hodge was appointed Acting Head Coach in September 2016 following the departure of Alan Solomons. Hodge reverted to backs coach at the start of the 2017 season.