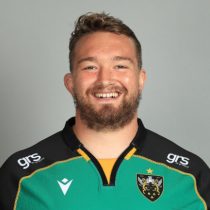 The gifted scrummager made his senior debut for Northampton against Saracens in 2018, before having a phenomenal impact in his opening Premiership encounters – memorably helping to shove Leicester Tigers’ pack backwards in the closing stages at Welford Road as Saints secured a first league double over their rivals in over a decade.

Painter kicked on in Chris Boyd’s first season at the helm, featuring in 15 games during the 2018/19 season, and scoring his first try in Black, Green and Gold against Bristol Bears in September of that campaign. The tighthead prop then signed his first senior contract with the Club ahead of the 2019/20 season.

Painter also made a series of appearances for the Wanderers in the run up to his first-team debut against Saracens in April 2018, lifting the Premiership Rugby A League title that same month.

He was selected for the England XV to face the Barbarians. Ahead of the 2019/20 season he has 18 caps for the Saints, including 4 in the Challenge Cup.