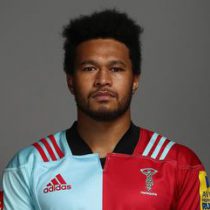 Elia was selected for New Zealand’s Condor Sevens in 2013, and made the under 19s team the following year.

2015 saw him I being named captain of the under 19’s where his team won the national title, with him also receiving a selection into the Samoa under 20’s that same year for the world cup.

In December 2016, he was signed by Premiership club Harlequins on a short term deal, with the deal being extended until the rest of the 2016/17 season.

Despite 2016/17 being a season marred by injuries, the talented Hooker earned himself a call-up for the Samoa squad for the 2018 Pacific Nations Cup Squad.

Head of Rugby Paul Gustard described Elia as "one of the most dangerous ball-carrying Hookers in the Gallagher Premiership" following the announcement that he had re-signed for the 19/20 season, stating that he and his team of coaches are committed to making one of the League's leading front row forwards.