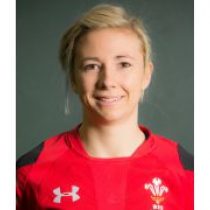 Elinor captained the Welsh Under 20s in 2009 and earned her first cap against Sweden.

In January 2017, the talented outside half was called in for the 2017 Six Nations, with her performances cementing her spot in the 2019 Six Nations squad.

In June 2020, the Wales and Barbarian out-half signed a new deal with Bristol Bears Women ahead of her 8th season with the club.