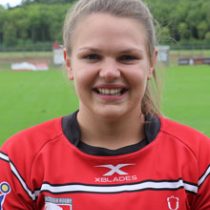 Elle Perry was born in Welwyn Garden City in 1997 and started playing for Hertford RFC at just six years old.

Her mother Jan and father Paul used to take her to play at Hertford and always encouraged her in rugby, with Jonny Wilkinson a role model from an early age.

Perry attended John Warner School where she also used to play football and netball, but rugby was her main passion and she went on to win the School Games in 2015 with the south east sevens team.

The prop forward went on to attend Hartpury College where she got the opportunity to balance a training schedule with academics, at which point she realised she may be able to make it at the top level.

Perry now studies sport and exercise science at Coventry University and made her Saracens Women debut against Darlington Mowden Park in 2015, a week after tuning 18.

Remarkably, she played in the 2016 Premiership final for Saracens at the age of 18, with Richmond prevailing on the day, but she still counts it as one of her proudest rugby moments.

Another one came in February 2016, when the young prop scored a try on debut for the England U20s side in a 41-12 win against the British Army.

She made her Red Roses debut in the 2018 Internationals, playing in all three Tests and has since been awarded an EPS agreement.