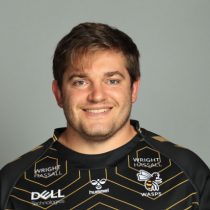 Millar-Mills began life with Edinburgh on tour in South Africa as they took on the Cheetahs in the Pro 14, and has spent the year learning from the likes of WP Nel at BT Murrayfield.

He got the chance to join Yorkshire Carnegie permanently following a successful trial period from Caldy.

His performances for the Headingley outfit saw him snapped up by Richard Cockerill, and after signing for the West Londoners he signed a deal with Ealing Trailfinders and competed for a place in the club's front-row alongside some top quality players.