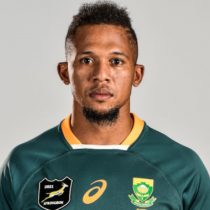 Jantjies steered the Lions to the Currie Cup title in 2011 and has gone on to establish himself as one of the most naturally talented flyhalves in South Africa.

His ability to add width to the backline stands out alongside his impressive kicking abilities but he is also a committed defender and is not afraid to take the ball to the gainline.

He made his test debut on 29 September, 2012, in Pretoria against Australia in the inaugural Rugby Championship season. The Springboks won 31-8. He kicked two penalties against New Zealand on 6 October, 2012, registering his first points for the Springboks in a 32-16 defeat.

After being overlooked by Heyneke Meyer for the Springboks' Rugby World Cup squad in 2015, Jantjies was given his Springbok chance in the first Ireland Test when Pat Lambie was ruled out with a concussion.

Jantjies form during the 2016 Super Rugby season saw him fighting for the Springbok no.10 jersey again and brought his test cap tally to 9.

The flyhalf featured in three of the Springboks four June Tests before helping the Lions to their third consecutive Super Rugby Final. He scored his first test try in a 37-15 win over France at Kings Park Stadium in Durban on 17 June, 2017.

He registered 22 points in that victory against France, a total he has not matched before or after in a test match.

He was one of only two players to play every single minute of the 2018 Super Rugby scoring 173 points in 19 matches.

Jantjies was part of the 2019 Rugby World Cup winning squad. He kicked 14 conversions at RWC 2019. Only Percy Montgomery (22) and Jannie de Beer (17) kicked more conversions for the Springboks in a single World Cup.

At the end of the 2019 Super Rugby season, Jantjies snubbed overseas interest to re-sign with the Lions for two more years, up until the 2021 season.

Jantjies joined Top 14 club Pau on short term contract in 2021 and helped the side retain their Top 14 status.

He returned to South Africa to be named in the Springbok squad for the tests against Georgia and the British and Irish Lions. He turned out for the South Africa A team who managed a 17-13 victory over Warren Gatland's charges.