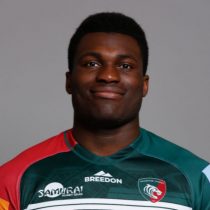 Previously a basketball player at county level as well as playing football, Emeka got into rugby in secondary school and then with the Tigers’ Developing Player Programme based at Newark.

He was part of the Tigers squad that won the 2018/19 Academies Under-18 League and shared the title a year later following a draw with London Irish in the Final.

Emeka was among four Tigers players selected for the England Under-18 development tour to South Africa in the August 2019.