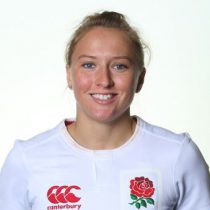 Scott first played rugby at the age of seven in the boys U8 team at Stanford-le-Hope RFC. After being with Basildon/Rochford she moved to Thurrock and was a key figure in two successive promotions.

Scott was chosen in the 12-strong Team GB sevens squad at Rio 2016, scoring two tries and two conversions in the tournament.

She then moved to Saracens in 2016 before playing in every Six Nations match in the 2017 season.

For the 2018/19 season, she moved to Harlequins and in January 2019 was awarded an EPS agreement. She came off the bench in every game of the 2019 Women’s Six Nations as England won the Grand Slam, scoring in the opening match against Ireland.

Scott was a key part of the squad to travel to San Diego for the Super Series in 2019. She represented England in the 2019 autumn tests, and was named player of the match in the 0-53 win v Scotland in the 2020 Six Nations.

In July 2021, she signed a new deal with Harlequins Women.