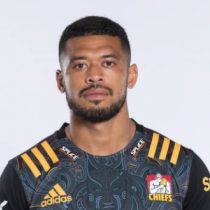 Nanai-Seturo is a former age-grade rugby league standout in Auckland.

Sydney was not the first time he pulled a national jersey on having represented New Zealand at schoolboy level in 2017.

Nanai-Seturo was contracted by Rugby League side Warriors but the contract has been cancelled after a ruling stating that it was not legally binding as he was 15-years old when signing the deal.

After some debate, New Zealand Rugby and Warriors came to an agreement and the exciting youngster signed a deal with the NZRU.

Nanai-Seturo signed a deal with Counties Manukau for the 2018 Mitre 10 Cup. Following the conclusion of the Mitre 10 Cup, he was named in the Chiefs' 2019 Super Rugby squad.

Nanai-Seturo has been named for the Chiefs squad ahead of the 2020 Super Rugby season. He has obtained 11 caps so far and will be looking at extending this.