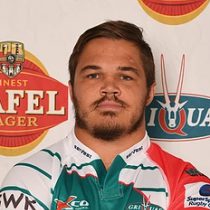 The solid front rower first made his impact at school when he represented his local provincial side, the Griffons, at the Under-18 Craven Week tournament in 2008.

The same year, he also played for the Griffons U19 side.

In 2010 he moved to Johannesburg, where he represented the Golden Lions U21 side in the 2010 Under-21 Provincial Championship.

In 2013 Varsity Cup competition; he was the first-choice tighthead prop for UJ, starting all eight their matches as they reached the semi-final of the competition.

His performance in the Varsity Cup resulted in Kimberley-based side Griquas drafting him into their side when they had an injury crisis during the 2013 Currie Cup Premier Division season.

During the 2015 Super Rugby season he represent the Cheetahs on 6 occasions and has since returned to Griquas.