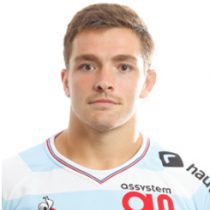 Sanconnie made his senior debut for Brive at Gloucester in the European Challenge Cup in October 2014, with his Top-14 debut coming at Toulouse the following May.

He skippered Brive to their home victory over Dragons in the European Challenge Cup on 21 January.

The no.8 played all five rounds of the 2015 U20 Six Nations, scoring tries in successive starts against Italy in San Dona and England in Brighton.

He appeared in all five games at the 2015 Junior World Championships in Italy, helping France to 4th place.

Sanconnie continued his rise to the Top after he was named in France's 2017 Six Nations squad and made his debut against Italy.

He was then named in France's squad to tour New Zealand and started the first test against the All Blacks.

Following Brive's relegation to the PROD2, Sanconnie signed with Racing 92 ahead of the 2018/19.

Sanconnie was a late inclusion in the French National squad ahead of the 2019 6 Nations following the withdrawal of injured Bernard le Roux. He has had 2 previous 6 Nation appearances.

Sanconnie was recalled to the France test squad in November 2020 where he will look to add to his four test caps.