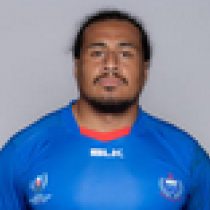 Born in Wellington, of Samoan heritage, Filo Paulo played for Auckland Blues where he played 26 times at Super Rugby level and made 35 appearances for North Harbour in the ITM Cup competition since 2008.

A physical player and strong line out jumper, Paulo can play in the second row or blindside and made his international debut for Samoa in their Autumn 2012 tests, playing against Canada and France. He was also part of the Samoa team that defeated Wales by 26 points to 19, at the Millennium Stadium in November.

Standing at 6ft 6in tall and weighing in at 19 stone Paulo is certainly a formidable presence on the pitch and had a stint with Ulster early on in his career before returning to New Zealand.

In 2017, Paulo left Treviso to join up with the recently promoted London Irish for the 2017/18 season.

Capped 27-times by Samoa, the Wellington-born second row was named in the Somoa Squad ahead of the 2019 Pacific Nations Cup