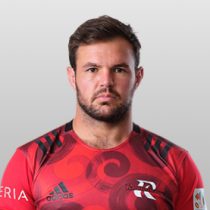 Franco represented Valke at youth level before joining the Sharks at U19, U21 and Vodacom Cup. Marais was part of the victorious South African Junior World Championship in 2012 and made his senior Sharks debut shortly afterwards in the Currie Cup.

In 2014, Marais made his Super Rugby debut and has been a pivot part of the Sharks scrum since. In May 2017, he was named in the South Africa squad to face the French Barbarians, after some consistent performances for the Sharks.

Marais took his Super Rugby cap tally to 34 in 2017 and will continue to provide the Sharks with solid set pieces and stellar defence.

In March 2018, Marais announced that he will join Gloucester in the Premiership at the end of the 2018 Super Rugby season.

The hooker made 38 appearances for Gloucester by July 2020 before confirming that he would be joining Japanese Top League side Docomo Red Hurricanes.

He signed a short-term contract with Gloucester to finish the 2019/20 season.