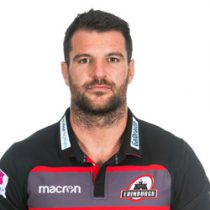 Born in Dunfermline, Scotland, McKenzie is a versatile forward who operates comfortably at second row or on the blindside of the scrum.

Having represented Scotland at underage level, McKenzie went on to play for Edinburgh and made his debut for the club in 2008. Three years later he linked up with Sale Sharks and also went on to represent Scotland at full senior level.

2014 saw him sign a deal with Edinburgh and sored his first try of this second spell at the club in the European Rugby Challenge Cup 2014–15 quarter-final victory over London Irish.

Fraser was appointed club captain of the club in October 2017 and subsequently led the Scottish side to the PRO14 Final series for the first time in its history as well as a place in the 2018/19 Heineken Champions Cup.