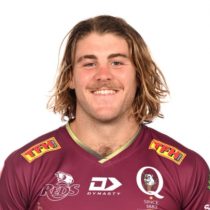 An incredibly promising talent, McReight has been tipped as the heir to David Pocock.

The Sunshine Coast born and Brisbane raised openside flanker first came to rugby at the age of 15, playing in the centres.

However, it wasn't until a move onto the side of the scrum that McReight gained higher honours. Playing not only for combined states in 2015, McReight also sought selection within the Queensland 7s program in 2015, before progressing in 2016 to the Queensland schoolboys side, where he excelled gaining selection in the 2016 Australian Schoolboys squad.

It was due to this that McReight gained selection in the Queensland U20s in 2017 and again in 2018. As well as the 2017 championship Queensland Country NRC side.

The talented openside was named in the Junior Wallabies side for the third consecutive year in 2019 and lead the side in the U20 Championship in Argentina.

In August 2019, McReight signed with the Reds for a further four years. He played a total of three Super Rugby games, before being selected in the Junior Wallabies squad. McReight was named Australian captain and led his side to a Grand Final appearance at the U20s World Championships in Argentina.

The promising youngster made just three appearances in his debut season but 2020 saw him make the Reds' #7 jersey his own as he featured 14 of the Reds' 17 matches across Super Rugby and Super Rugby AU.

His form caught the eye of Dave Rennie as he was named in the Wallabies' first squad of 2020.