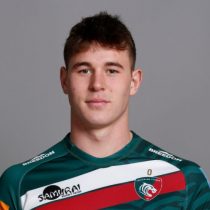 A product of a rich seam of talent from Norfolk rugby, Freddie made his Leicester Tigers debut in 2018/19 while still part of the club’s academy system.

Freddie joined Tigers from Norwich School and was a regular at full-back as the academy team won the National Under-18 League title in successive seasons – 2017/18 and 2018/19 – without losing a game as well as gaining England Under-18 selection.

He made his senior debut in the Premiership Cup at Northampton in January 2019 and then received a late call to travel with senior squad for Premiership fixture at Sale in March of that year before being drafted on to the bench just 15 minutes before kick-off when fellow academy graduate George Worth pulled out with injury.

He made his league debut as a replacement in the closing minutes of the game and joined the Development squad in the build-up to the 2019/20 campaign.

On 3 January 2020 Freddie was named in the England under 20 squad for the 2020 Six Nations Championship.