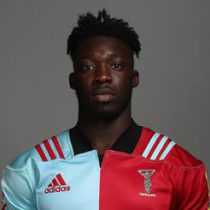 He was appointed as captain of the England U18 team to tour South Africa in August. He had not only bagged a try in the runaway victory over Wales but was the BMW Man of the Match.

Scoring tries in his first two games for England U16 in victories over Scotland and Wales in 2014 gave Gabriel’s international career lift off.

London-born Gabriel ran in four tries in his first match for England U18 in the 85-8 win over Portugal in the Rugby Europe U18 Championship in Montauban last year and added a fifth against South Africa A that August. Gabriel has more than doubled that total with another six this year, including one against South Africa Schools 'A' in August.

A new member of the Harlequins Senior Academy for 2016/17, he was previously in the club’s EPDG. He captained London & SE U16 and was initially educated at St Joseph’s Junior School, Upper Norwood.

Ibitoye helped England win the U20 6 Nations in 2017 and helped his country to the U20 Junior World Championship where they finished second, finishing the competition as England's top try scorer.

His first Harlequins appearances came in November 2017 when he opened his try-scoring account for the club with a stunning try against Bath Rugby in the Premiership in his second appearance.

In January 2018 he signed a new deal with the Quins.

Despite spending a portion of the season out with injury, Ibitoye still managed to supply some magic in 2018/19, with his try against Newcastle Falcons at Kingston Park in the Gallagher Premiership being named as the Greene King Try of the Season at the Club's End of Season Awards.

After 40 appearances and 70 points scored for Harlequins, the England winger signed a two-year deal with TOP 14 side, Agen, in July 2020.