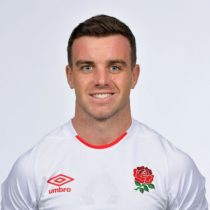 Son of former Bath Rugby head coach and former Rugby League legend Mike Ford, George quickly built up a big reputation as of one of the top flyhalves in England.

In 2011 he kicked off his career as the youngest player to ever take part in a professional match and the youngest member of the England squad that reached the World Juniors Final in 2011, partnering Owen Farell in the starting line up, a combination that has done well for England ever since.

He was named in the England Elite squad and made his first appearance for his country in 2014 in the 29-18 victory over Wales in the Six Nation. His impressive form for England has continued, with a 75% kick success rate, earning him a spot in Lancaster's 31 man squad for the 2015 Rugby World Cup on home soil.

He would play in all of England's games at the World Cup, scoring 10 points. His 25 points against France during the 2015 Six Nations was the most points ever tallied by an Englishman against France in any test.

In June, he made an important contribution against the Wallabies in Brisbane and launched a perfectly-weighted chip kick that led to his side’s third try by Jack Nowell in the 39-28 victory. A week later in Melbourne, he was courageous and composed in defence and took pressure off his side with his kicking. His best attacking performance was in the third Test in Sydney when he completed an impressive tour.

The Bath out-half failed to the make the 2017 Lions Tour despite impressing for club and country at the time but was named as one of the vice-captain's for the summer tour to Argentina.

It was confirmed in February 2017 that Ford would leave Bath Rugby at the end of that season to join Leicester Tigers for the 2017/18 season.

Ford topped the Premiership points standings for the 2018-19 season on 221, and was ranked fifth in the kicking statistics, with a 84.62% success rate.

He went on to help England reach the final of the 2019 Rugby World Cup in Japan, beating New Zealand on the way. He finished the World Cup with 65 test caps, 48 starts, 300 points and had captained the side on four occasions.

On 1 January 2020, Leicester Tigers kicked off the New Year with the announcement that Ford had signed a new deal with the club.

Ford went into 2020 Six Nations with 26 appearances in the competition having scored 101 Six Nations points.