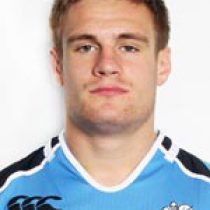 A native of Aberdeen, the tight-head prop attended Westhill Academy and Robert Gordon's College, playing for the latter alongside spells with Aberdeen Wanderers and Glasgow Hawks. Hunter captained Scotland under-20 throughout much of 2011, and has also seen national service at under-17 and under-19 level. He made his Heineken Cup debut for the Warriors away to Castres Olympique in December 2012.