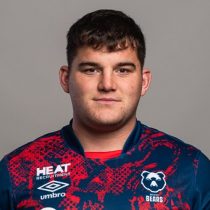 The SGS Filton College pupil has featured for Bristol Bears ‘A’ in the Premiership Shield.

He has been part of the Academy system since U13 before he made his senior debut against Leinster ‘A’ in the 2017/18 British and Irish Cup and joined the squad for pre-season during the summer.

In May 2019, Kloska agreed terms with the Bristol Academy for the 2019/20 campaign before being named for his Premiership Rugby debut from the replacements bench against Newcastle Falcons in round 22.