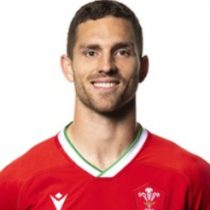 George North has established himself as one of the world’s best wingers. The King's Lynn-born George moved to Wales at the age of two and marked his Test debut for Wales by scoring two tries in a narrow 29-25 defeat to then World Champions South Africa in Cardiff. These tries made him the youngest Welshman to score on his debut.

George’s professional career started with Llandovery in 2010, a feeder club for Scarlets whom he joined 2010. During his three years with Scarlets, he scored 14 tries for the West Wales region before joining the Saints in the summer of 2013.

His first season at the Saints ended with him helping the side win both the European Challenge Cup and the Aviva Premiership scoring seven tries in 15 Premiership appearances.

Since exploding onto the international scene in 2010, George has amassed over 90 caps, cementing his place in the starting XV. In addition to this, he has won three caps for the British and Irish Lions, scoring crucial tries in the first and third Tests as the Lions earned an historic Test series victory in 2013.

George has broken multiple records. He became the first teenager to reach 10 Test tries, and had played 21 times for Wales before turning 20. His tries at the 2011 Rugby World Cup made him the youngest try scorer at a World Cup as Wales reached the semi-finals for the first time in over 20 years.

Post-World Cup, George played a crucial role as Wales won the Grand Slam in 2012 and defended their title the following year. A regular in the Wales side, George also represented his country at the 2015 Rugby World Cup with Wales making the quarter finals. He then went on to become top scorer in the 2016 Six Nations with four tries and was subsequently selected for Wales’ summer tour to New Zealand.

In April 2017, George was selected for the British & Irish Lions tour to New Zealand. He has made 7 appearances for the Lions (3 Tests). The Welsh winger was one of the stars of that Tour - his stunning solo effort helping the Lions to a win in the first Test against the Wallabies.

North missed out on selection for the first test against New Zealand and picked up an injury against the Hurricanes which ruled him out of the final two tests.

He then confirmed that he would be leaving Northampton Saints at the end of the 2017/18 season to return to Wales with the negotiations with Welsh sides still underway.

In April Ospreys confirmed that North would join the club ahead of the 2018/19 season.

He was later included in Wales squad for the June Test and went into the June Tests with 73 tests (3 at centre) and 32 tries.

He was part of the Wales squad for the 2019 Rugby World Cup, scoring a try in the 76th minute of their match against Georgia.

North was again named for the Wales squad ahead of the 2020 Six Nations with a total of 91 caps.

He became the youngest player to win 100 Test caps in international rugby when he played for Wales against England in the 2021 Guinness Six Nations campaign.

In September 2021, he signed a new two-year contract with Ospreys.

Sports Person of the Year award 2010