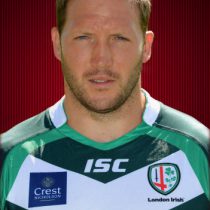 Born in Warrington, England, Skivington is a towering lock forward. A commanding presence at lineout time, Skivington attended John Fisher College before beginning his professional career with London Wasps. Five years later he moved to Leicester Tigers for a brief two year stint before linking up with London Irish. Skivington has also represented England Saxons and made his debut in 2008.

A call-up to the full England squad saw Skivington also lead the Saxons throughout their victorious Churchill Cup campaign in 2010.

He was called up to England's 2011 Six Nations Championship squad in January 2011 as injury cover for Courtney Lawes.

In June 2016, Skivington called time on his playing career at the age of 33 due to a shoulder injury.

Having been forwards coach at London Irish, and also coaching with the Samoan national team, Skivington was named head coach of Gloucester in July 2020.