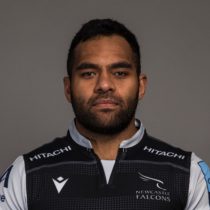 Born in Fiji but moving to England at the age of seven due to his father Josaia’s service in the British Army, Wacokecoke was in Northampton Saints’ and Bath’s academies before moving to the North East to play for Darlington Mowden Park and Northumbria University, from where he earned England Students honours.

Making his Premiership debut for the Falcons at the end of the 2018 season and going on to become a regular this term, Wacokecoke can play at centre or wing and scored nine tries in his 16 appearances for the Falcons before signing a new two-year deal.