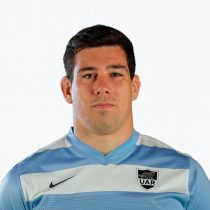 An incredibly athletic and versatile second-rower, Guido Petti has shone for Argentina at multiple levels.

Having represented every Argentinean team possible from U18 including the Pampas XV in the Currie Cup it was a matter of time before Petti made his full debut.

Petti was a member of the Argentina Under-20 side which competed in the 2013 and 2014 IRB Junior World Championships, he also represented the Argentina Jaguars side in 2013 and 2014 and played for the Pampas XV during their 2014 tour of Oceania. He made his senior debut for Los Pumas on 14 November 2014 in a 20-18 victory over Italy in Genoa.

Guido played with San Isidro Club in the Torneo de la URBA in his homeland before being drafted into the Jaguares Super Rugby squad in 2016 having represented his country at the 2015 Rugby World Cup.

He was a key member of the Jaguares side that reached the Super Rugby final in 2019.

Petti joined Top 14 club, Bordeaux, in 2020. A regular with Los Pumas, Petti was a starter for the national team on 14 November 2020 in their first-ever win against the All Blacks.