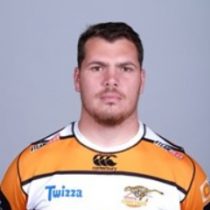 Janse van Vuuren attended Hoërskool Monument in Krugersdorp and in 2013, he was selected to represent the Golden Lions at the premier high school rugby union tournament in South Africa, the Under-18 Craven Week, held in Polokwane.

Janse van Vuuren started the 2016 season by representing CUT Ixias in the 2016 Varsity Cup and appeared in all seven of their matches in the competition, helping them to two victories and sixth place on the log. He then played some more first class rugby for the Free State XV in the 2016 Currie Cup qualification series.

In May 2016, the Cheetahs announced that he signed a two-year contract extension, to remain in Bloemfontein until 2018. In November 2016, he was named in the Cheetahs Super Rugby team's training squad as the team prepared for the 2017 Super Rugby season.

He has been regularly been involved in the Cheetahs squad since.