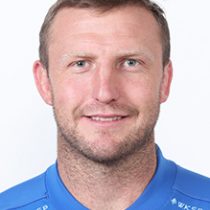 Born in New Zealand and playing his rugby with the Auckland Blues, Southern Kings and the Hurricanes in the elite Super Rugby competition.

Parkes made the move to West Wales ahead of the 2014-15 season and proved to be an invaluable asset in the midfield.

A powerful ball carrier and positively heroic in defence, the Kiwi has slotted in well with the Scarlets’ style of play, linking up with midfield partner Scott Williams to devastating effect.

2016 saw Parkes hunt his half-century, having then made 44 appearances and bagging six tries as well as multiple Man of the Match awards.

In October 2017, he received a call-up to Wales' 36-man squad for the Autumn Series matches against Australia, Georgia, South Africa and New Zealand.

Parkes made his debut for Wales against South Africa on the 2nd of December scoring two tries at the Principality Stadium.

The well-traveled centre was named in the Wales 2018 6 Nations squad.

He helped Scarlets reach the semi-finals of the Champions Cup, as well as the Pro14 final before being included in the Wales June Test squad.

He was once again named for the Wales squad ahead of the 2020 Six Nations with a total of 25 caps.

In May 2020, it was confirmed that Parkes had signed a deal with Japanese Top League side, Panasonic Wildknights.