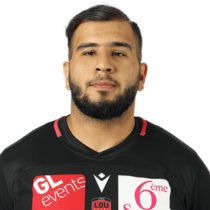 A powerful and talented front rower, Hamza Kaabeche was a late bloomer as he was not selected in any youth national side. In 2012, he joined Lyon's junior ranks in and has since progressed through the academy system.

Originally from Bourg, Kaabeche settled in at Lyon and made four appearances in his debut professional season with Lyon in 2016/17. lining out three times in the Challenge Cup and played the final round of the TOP14.


Kaabeche has continued to grow at Lyon and has started to become a more well-rounded tighthead.


His 2018/9 season was a breakthrough one for the youngster who featured in 15 of his side's 34 games and has been tipped to make his test bow in the near future.