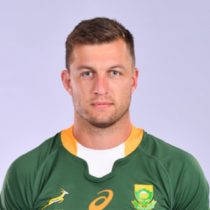 A born winner, Handre Pollard made waves as a schoolboy and was earmarked as a future Springbok during his time at Paarl Gymnasium.

While still at school, Pollard won the 2012 IRB Junior World Championship with the Baby Boks and went on to make the South African Schools team in the same year. Despite not playing in their first match against Ireland for the u20s, he did start their remaining four matches. His boot was largely responsible for the Junior Boks 22–16 victory in the final as he kicked four penalties and a drop-goal to lift the trophy for South Africa for the first time.

Signing with the Bulls in 2013 and only a couple of months out of school, the flyhalf then went on to make his senior debut in the Vodacom and Currie Cup. In 2013, Pollard also represented Tuks in the Varsity Cup featuring mostly at inside centre and guided the side to glory that season scoring 68 points including 17 in the final.

Once again he was included in the u20 South Africa side for the Junior World Championship helping the side to a third-place finish. The Bulls quickly realised the talent they had and following the departure of Morne Steyn, they managed to secure the services of Pollard until 2017 as he became a regular starter for the side.

He was included in the Bulls squad for the 2014 Super Rugby season and made his debut in the first round of the competition in a 31–16 defeat to the Sharks in Durban, also scoring his first Super Rugby points by kicking a late conversion.

He was included in a South Africa Under-20 squad for the third time for the 2014 IRB Junior World Championship, and also named captain of the side. His performances in the competitions saw him named as the 2014 Young Player of the Year as South Africa where edged 20-21 in the final by England.

Following the 2014 Junior World Championship, Pollard was called up to the senior Springbok squad for their final match of the 2014 incoming tours series against Scotland. Injuries to Patrick Lambie and Johan Goosen, as well as Morné Steyn, withdrawing from the squad saw Pollard being named as the starting fly-half for their match against Scotland. He subsequently made his international debut on 28 June 2014 in Port Elizabeth, contributing thirteen points (five conversions and a penalty) to help South Africa convincingly win the match 55–6.

He went on to make the Springbok squad for the 2015 Rugby World Cup in England where he featured in all 7 of South Africa's games scoring 93 points to finish as the tournament's top scorer as the Springboks finished third overall. In 2015, Pollard extended his contract with the Blue Bulls until the end of the 2019 season. He did spend three months with Japanese Top League side NTT DoCoMo Red Hurricanes after the Rugby World Cup.

After a sour, injury-filled 2016, Handre made a strong return after almost a year on the sidelines and was named captain of the Bulls ahead of the 2017 Super Rugby season.

Injuries hampered Pollard's 2017 season as he was only able to make 6 appearances and scored 50 points. A full fit Pollard went into the 2018 Rugby Championship with 29 test caps, ending the tournament with 39 caps and 339 points scored.

In May 2019, he agreed on terms with Montpellier until 2022 and would link up with the side after the Rugby World Cup.

A leader in the Springbok squad, Pollard was vice-captain for the national side as they went on to win the Rugby Championship and Rugby World Cup. The pivot scored 69 points in six games for the Springboks including a 22 point haul in the Final against England.

Injuries hit once again after the Rugby World Cup with the flyhalf sustained a fractured eye socket injury during the final, which he played on with. This delayed his debut for club.

Once recovering, Pollard was hit with another setback as he sustained an ACL injury that left him sidelined for most of the season. He returned in time to help Montpellier maintain their Top 14 status and win the Challenge Cup with the club.

The third highest test points scorer in Springbok rugby history, Pollard has registered more than 600 points in his 60 tests (As of December 2021).

In December 2021, Pollard signed a deal that would see him join Leicester Tigers from Montpellier ahead of the 2022/23 season.