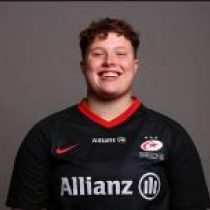 Stevenage-born Hannah started out her rugby career aged just four when she went down to Datchworth RFC, which was no surprise given both of her parents were involved in the game.

In fact, Hannah comes from good stock with her auntie, Jane Everett, also an England international prop as was her uncle, Gregg Botterman, who played for England and over 100 times for Saracens.

Hannah began playing rugby at age four for Datchworth & after eight years moved to play for Welwyn girls. She has recently played for Hertfordshire, London & South East as well as being selected into the England u18's development group.

Aged just 18, the prop made her debt in the Tyrrells Premier 15s for Saracens during the 2017/18 season and those performances saw her called up for England in the Test series against Canada, where she made her debut as a replacement.

After completing a year at Hartpury College, Hannah entered her first year of senior women's rugby in the 2017/18 season with Saracens and her performances lead to her inclusion in the England squad for the 6 Nations.

Hannah was one of 28 players offered a full-time contract in January 2019.

The prop, who had already made 22 England caps at just 22 years old, signed a new deal with Saracens Women in August 2021.