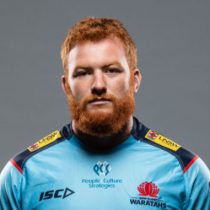 Making his way through the NSW Country pathway after stints with the Cowra Eagles and the Newcastle Wanderers, Cowra-born Harry Johnson-Holmes has locked in a spot in the 2018 NSW Waratahs squad.

After tossing up between becoming an astronaut or a professional rugby player, his performances as part of the 2015 Australian Schoolboys squad proved that he had made the right decision.

The Sydney University prop’s work ethic was recognised in the NSW Generation Blue Academy, where his efforts in the Super U20s season secured him his place in the Australian U20s squad that competed at the2017 Junior World Championship in Tbilisi, Georgia.

His talents don’t stop on the rugby field, however, having played the bass guitar in a rock band called “Geography of Mars” at a number of local venues in Newcastle. The fiery redhead was a regular starter for the NSW Country Eagles outfit in the 2017 National Rugby Championships.

The former Wallabies u20 star established himself as a regular for the Waratahs during the 2019 Super Rugby, stepping up in the absence of the injured Robertson.

Having made his Super Rugby in 2018, he made 17 appearances in his rookie season but averaged shy of 20 minutes a game.

With Tom Robertson out injured the following year Johnson-Holmes made the most of his opportunities averaging 50 minutes per game and featured in all 16 of the Waratahs matches.

The hard-working loosehead also averaged 5 carries and about 8 tackles throughout the season and was part of a relatively strong Waratahs pack. Johson-Holmes was a late call to the Wallabies squad in July 2019 and was named on the bench for his test debut against the Springboks at Ellis Park three days later at the age of 22.

Johnson-Holmes wasn't able to add to his test tally in 2019 but continued to feature regularly for the Waratahs in 2020 making 13 of a possible 14 appearances for the side and earned a recall to the Wallabies squad.