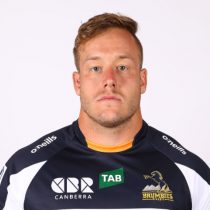 As local as they come, Canberra-born Loosehead Harry Lloyd signed for the Brumbies ahead of the 2020 Super Rugby season, making a welcome return to the National Capital following a stint with Western Force.

Lloyd made the move to Perth in 2018 after captaining his local side, Western District Lions, to the 2017 Griffin Legal John I Dent Cup Final.

No stranger to top-level rugby in the ACT, Lloyd made ten appearances for the Canberra Vikings in the National Rugby Championship and the highly-regarded prop is looking forward to coming back to Canberra to the club where he was part of the original Academy in-take upon its relaunch in 2017.

A very mobile prop with good work rate that is well complemented by an excellent set-piece, Lloyd first wore the Brumbies jersey in round one against the Queensland Reds.

On that night, he became Brumby number 222, with the Canberra-local going on to feature 17 times in the past two seasons of Super Rugby AU and Trans-Tasman rugby.

In August 2021, he signed a short-term deal with Edinburgh Rugby.