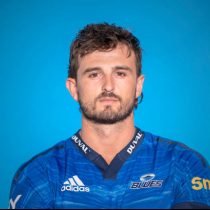 Auckland raised first-five Harry Plummer was the deputy head boy at St Peter’s College and went on to represent NZ Schools pivot and was the club captain of premier club side Grammar TEC.

At school, Plummer was also the leading point scorer in the Jock Hobbs Memorial National Under 19 tournament. His performances at school saw Counties Manukau and Auckland fight over his services with the latter winning the race.

Plummer, son of Auckland physio Mark Plummer, operated mainly at second-five for the Auckland Under 19s, who claimed the Graham Mourie Cup in Taupo in 2017.

At 19-years-old Plummer made his provincial debut for Auckland against Bay of Plenty in the 2017 Mitre 10 Cup and made his first start against Canterbury two weeks later.

In May that same year he signed a two-year deal with the Blues.

Harry made his debut from the bench against the Crusaders in the opening round of the 2019 Super Rugby season and went on to feature in ever single game thereafter.

With 16 Blues caps and another season at the helm of Auckland in the Mitre 10 Cup, Harry can call on plenty of experience to compliment his natural talents in 2020.