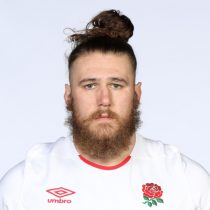 At 6’4” and almost 21 stone, the long-haired tight-head certainly fits the bill to be one of the most promising front-rowers in the country.

Battling for the No.3 jersey at Sandy Park alongside internationals Greg Holmes and Tomas Francis, as well as highly-rated young guns Alfie Petch and Marcus Street, Williams has certainly come a long way in a short space of time.

Having started his senior career with two years at Loughborough Students, Williams made the step up into the Championship where he featured for Nottingham and then Jersey, the latter of which he was plucked from in the summer of 2015 by Exeter Chiefs.

He joined the Exeter Chiefs setup in the 2015 season and featured in 15 Premiership and European games for the side before extending his stay at the Chiefs until the 2017/18 season.

His impressive on-field form was noted from afar by England head coach Eddie Jones, who initially called him into his squad for their summer tour to Argentina. Although Jones believed the Exeter man was “in need of a hair-cut” - he liked what he saw in the Exeter prop, handing him starts in both Test matches against the Pumas.

Since then, Williams has been a regular feature in England squads, featuring in Autumn internationals, as well as the Six Nations Championship. He wa however, omitted from Jones' squad for the Rugby World Cup in Japan.

Williams is quickly closing into 100 appearances for the Chiefs since arriving at the club. His regular good form saw him get a recall to the England squad ahead of the 2020 Six Nations.

The powerful tighthead prop heads into the competition with 18 test caps since his debut against Argentina in 2017, he also has 5 Six Nations appearances to his name.