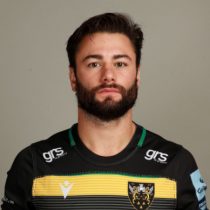 A former England Under-20 international, Henry Taylor made the switch to Franklin’s Gardens from Saracens ahead of the 2019/20 campaign.

Taylor, a lively No.9 who boasts superb ball distribution and a keen eye for a gap, began his career at Harlequins Academy before heading to Loughborough University to further his rugby education and pursue a degree in Fine Art.

His impressive performances in National One earned him a contract with Saracens, where he also completed a loan spell with Bedford Blues.

Taylor boasts international credentials after representing England under-20s back in 2014, making his debut during the Six Nations before being crowned a Junior World Champion later that year in a side.

After making 10 first-team appearances for Saints by January 2020, Taylor signed a contract extension with the Club.

In July 2021, Northampton Saints confirmed that the scrum-half is leaving the Club to pursue a new career outside of rugby.