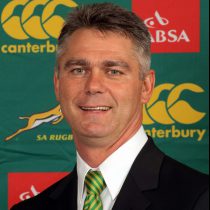 Meyer, who studied sports psychology at the University of Pretoria, played for the university's rugby team and took on a player-coaching role.

After a bitter-sweet rugby career, he quit rugby and took on senior role in a sports supplement company before being enticed back to coach the UK’s Leicester Tigers in the Premiership.

His achievements include winning the Super 14, Currie Cup and Vodacom Cup competitions and standing as a strong contender to succeed Jake White at the helm of Springbok rugby in 2008, but lost to Peter De Villiers, only clinching the Springbok coach title in 2012.

In March 2018, Stade Francais announced that Meyer will coach the club ahead of the 2018/19 season.

May 2019 saw him sign a new two-year deal with Stade Francais but he would leave the club before the end of the 2019/20 season after a poor start to the season.